There was an error retrieving images from Instagram. An attempt will be remade in a few minutes.

According to Irish bookmaker / betting agent Paddy Power PLC, Sail Training International current odds of being awarded the Nobel Peace Prize this Friday are 50-1. This puts them slightly behind Muhammad Ali (40-1), even with Oprah Winfrey and ahead of Irish politician Bertie Ahern (60-1), US Secretary of State Condoleeza Rice (80-1), recent past British Prime Minister Tony Blair, American conservative radio talk show host Rush Limbaugh (100-1), US President George Bush (250-1) and British reality television celebrity Jade Goody (?)(500-1). The current odds on favorite is former US Vice President and environmental advocate, Al Gore (5-2). You can find all of the published odds here.

For the second year in a row the international tall ships organization, Sail Training International has been nominated for the Nobel Peace Prize. The award is scheduled to be announced Friday, October 12, 2007 at 11:00 am Oslo time. The competition is tough with 181 nominations including 46 organizations.

Okay, it’s a real long shot but it’s an amazing accomplishment and honor just to be considered. The Nobel Committee strongly encourages all nominations to be kept confidential; however, each year, a few slip out which isn’t really a bad thing if you are a long shot. The publicity surrounding the awarding of this prestigious honor can really raise awareness of a cause or nonprofit organization like Sail Training International. 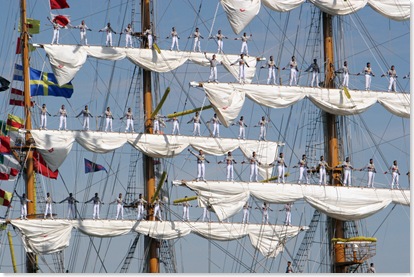 Wouldn’t it be great to see a sailing organization that positively influences thousands of young lives and brings together so many different nationalities for friendly competition, international understanding, camaraderie and goodwill?  One can only hope and dream. But it’s still all good for sail training and the maritime community in general.