In today’s NY Times (Oct.25, 2007), Sean D. Hamill wrote an article entitled A Riverboat Could Be Cruising to the End of the Line in which he looks at the possible short future life of the Delta Queen, an American maritime treasure.

The Delta Queen will be ending her service next year unless her owners, Majestic American Line, are able to secure an act of Congress (literally). The article states that on the surface the reason is that the vessel has a steel hull with a wooden superstructure that does not meet modern safety standards. While her safety record is strong, she would need an exemption from the 1966 Safety at Sea Act.

However, underlying the safety issues is the fact that the owners “removed” the Seafarers International Union from the Delta Queen and some of their other vessels last year and that this action nearly guaranteed that the issue would become political. It now appears to be a much more complex problem than one just involving safety.

According to the article, a similar “end of the line” scenario occurred in 1970 “but a grass-roots effort backed by hundreds of thousands of letters to Congress, and the support of the singer Johnny Cash, helped win the Delta Queen a reprieve — an effort fans hope to repeat.” There is currently a grassroots effort underway to Save the Delta Queen and Steamboats.org has an online petition that allows you to voice your support. As of this posting there were 604 signatures.

It’s really disappointing that one of the best know vessels in America, if not the world, might be taken out of service for technical or political reasons. Please don’t get me wrong, there should never be comprises made on safety. However, it’s such a shame to retire such an historic vessel whose name is recognized by school children across the country. Below is a drawing by 7 year old “Capt” Leonie which appears on the Save the Delta Queen website. 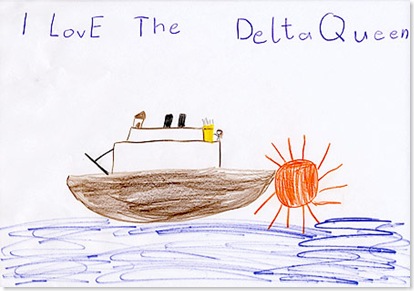 Another potential loss to America’s rich maritime heritage and culture! :-(

There is also a multimedia piece attached to the NY Times article, Life in the Slow Lane with some great photography by Nicole Bengiveno (photo credit for above)