I attended PodCamp Boston 2 on Saturday and it was a really great experience and a lot of fun. I ran into a couple of friends including Erin Short, a blogger/podcaster at the American Sail Training Association and Pablo Baques, a math teacher from Newport, RI.

The venue was the cavernous Boston Convention and Exhibition Center which was generously sponsored by the VON (Video on the Net) Conference which will be taking place there this week. The facilities were perfect for this type of event although maybe a tad big for the number of attendees that PodCamp drew. Leading up to the event there were reports that 1,200 people signed up; however, from my experience in running conferences I’d guess that on Saturday there were about half that number. However, that hardly matters because the crowd that did attend really made the event buzz. Those that signed up but didn’t make it really missed out.

In case you have never heard of PodCamp, it’s an unconference with a new media / social media focus. While some sessions were on podcasting, the breadth and depth of the presentations were surprising. An unconference agenda is set by the attendees who propose and present topics and there was definitely something for everyone. In fact, I had trouble picking from several interesting sessions on more than one occasion.

It takes a team of dedicated volunteers to put on something like this. The captains of the conference were Christopher S. Penn of the Financial Aid Podcast / Student Loan Network (PodCamp gold sponsor) and Chris Brogan, social media impresario. Of course, many, many others volunteered their time and effort to make the event a success.

The first session I attended was Viva La Vida Freelance which as the name suggest was about leading the life of a freelancer. Chris Wilson (Answers-for-Freelancers.com) lead an interesting panel discussion with (l to r) writer Jeff Cutler (www.ideas2words.com), Michael K. Bailey (MobaTalk.com) and Phillip J. Zannini (Phillymac Media) and Laura Fitton (Pistachio Consulting). Not surprisingly the emphasis was on always looking for your next gig. It was interesting to hear (and see) how much these panelists use of Twitter. (Recommendation re setting fees and more: Alan Weiss of Summit Consulting)

The next session I attended actually had nothing to do with podcasting or new media. Chris Brogan and David Eckoff presented The Bigger Better Deal of Podcasting which covered strategies of getting control of our lives in this IM, Twitter, email world. I look forward to walking every morning, breathing more deeply and drinking more water; healthy advice for centering your life.

In the third session of the day, Jay Berkowitz (TenGoldenRules.com) presented 10 Golden Rules of Launching and Promoting a New Podcast which was a great intro with some really cool and useful tricks of the trade.

After lunch I attended Tools of the Social Media Trade by social media superstars Mitch Joel from Twist Image and Six Pixels of Separation blog and podcast and CC Chapman from Accident Hash and Managing the Gray. It was an informal but very informative session with lots of audience interaction. I listen to both of their great podcasts regularly so it was fun to see them in person together.

Mark Blevis, co-host of one of my favorite podcasts, Just One More Book, presented an interesting session entitled What is the Sound of Your Brand? about podcast intros and ambient music.

The final session of the day was an Intro/101 session by Bryan Person and Doug Haslam entitled Following and Joining Online Conversations: Social Media PR 101. Lot’s of time at the end of this session was spent on corporations objections about employee blogs. This photo kinda sums it up. 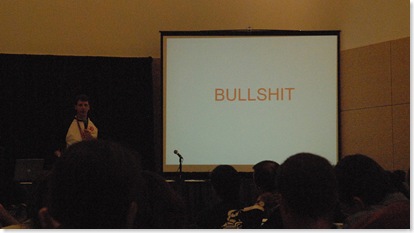 One of the most amazing things about PodCamp was that all of this great programming was free. That’s right, free! They even gave each attendee a cool PodCamp t-shirt! All of the costs of this event were covered by sponsorship. One of the dangers of organizing a free unconference is that people will register but in the end not show up. This can create a problem for organizers because they have to plan for space accordingly. They also might need to account to sponsors and have empty venues may give pause to sponsors future levels of support. So if you are ever thinking about attending an unconference, please don’t register unless you are certain you will be going.

Unfortunately, I was only able to attend the first day of PodCamp Boston but the second day schedule looked just as promising. Anyone interested in new media / social media and marketing should mark their calendars and to attend next year. There is also a PodCamp NYC coming up February 29 – March 1.

3 thoughts on “PodCamp Boston – A Great learning and networking Experience”