That is a quote from Sharon Butala from a passenger trip log that appears on the G.A.P. Adventure Tours website. No truer words could be used in conjunction with the below photo of MV Explorer passengers forced to take to lifeboat after their vessel experienced a significant breach of her watertight integrity. You can bet this wasn’t in the travel brochure! 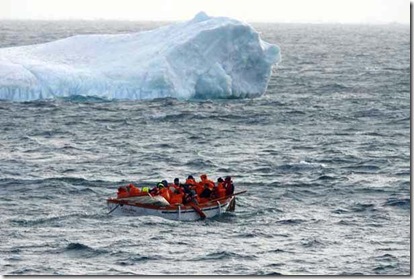 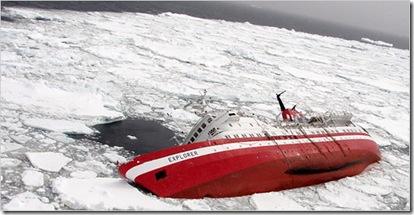 Here is a video with an audio report by the Explorer’s first mate.

I am just about finished reading Shackleton’s Way, Leadership Lessons from the Great Antarctic Explorer by Margot Morrell and Stephanie Capparell for the second time. It’s interesting to think about the experiences of the Explorer passengers who were in lifeboat for approximately 4 hours while waiting rescue by some nearby vessels compared to Shackleton’s crew whose timeline was as follows.

While it is difficult enough to try to appreciate what the passengers of the Explorer must have experienced this morning, it’s absolutely impossible to comprehend what Shackleton and his men went through over a period of over 1 1/2 years with no modern safety, communication or navigation equipment and scarce food and clothing. From the voice of the first mate on the above video, it appears that the crew and passengers were well prepared and did a great job in abandoning their ship. This is not an easy decision or action to take in warm Caribbean waters, never mind the inhospitable Southern Ocean.

There will be investigations and inquiries about what went wrong and new rules most certainly be promulgated in an attempt to avoid this type of thing happening in the future. However, there always has been and there always will be an element of real risk in going to sea and that is one reason why the experience can be life altering, especially for youth. People will continue to seek out this type of adventure. Sir Ernest Shackleton sums up this aspect of human nature best:

Difficulties are just things to overcome, after all.

Our friend John over at gCaptain.com has several great entries (here and here) including an audio report from Jon Bowmaster, a travel writer and lecturer aboard the National Geographic vessel Endeavour which was also involved in the rescue effort.

4 thoughts on ““…if Nature has anything to teach us at all, her first lesson is in humility””