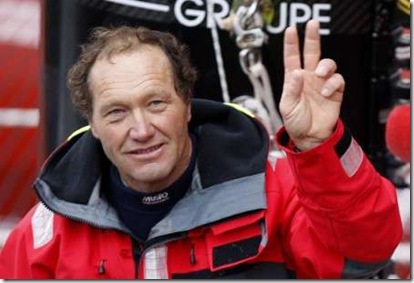 Francis Joyon arrived in Brest, France a little after midnight on January 20th and 57 days, 13 hours, 36 minutes and 13 seconds after having left. The Times Online provides this perspective on Joyon’s amazing feat:

(H)e redefined the art of the possible, as Bob Beamon, the long jumper, did with his “leap of the century” in 1968. Joyon took more than 14 fewer days in his 97ft IDEC II than MacArthur needed in B&Q three years ago.

Joyon was the first person to sail around the world alone on a multihull in 2004 but a year later, Dame Ellen MacArthur beat Joyon’s record by a single day. In fact only one other boat has sailed around the world faster and that was Bruno Peyron’s Orange II in March 2005 which took 50 days, 16 hours and 20 minutes. Of course, Orange II had a crew of 13. 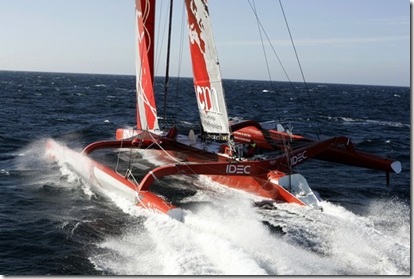 It’s amazing to examine how single handed solo sailing has evolved over the past 40 years from Sir Robin Knox Johnston’s first attempt in 1968-69.

This adventure was also undertaken in an environmentally friendly fashion:

Joyon carried no generator and ran his battery from a combination of a wind generator, solar energy and a methanol fuel cell. “There was no engine running, which was nice, and it is a satisfaction knowing you can go around the world with the minimum impact on the environment,” Joyon said. “Imagine circling the world on a windsurf board. The project is built on respecting the elements.” (Times Online)

“The speed part, the sailing passion part, that’s extraordinary. But what is the strongest of all is having precious moments when you can be in harmony with the planet, with the elements. That is what will stay with me,” he said. (ESPN)

Last year I posted about the stresses of that solo sailors face. NY Times: Study of solo sailor stress and how human’s cope. Make sure you watch the videos.

To give you an idea about the size and speed of Joyon’s trimaran Idec enjoy this YouTube video:

One thought on “Sailor smashes solo round the world record”