Arden Scott, a life long sailor who actually built her 28’ schooner herself, is a contemporary artist who’s beautiful works are both modern and ancient at the same time. The following 2 pictures are from an exhibition this summer at the Garrison Art Center, Garrison, NY.  (June 1 – August 10, 2008 ) 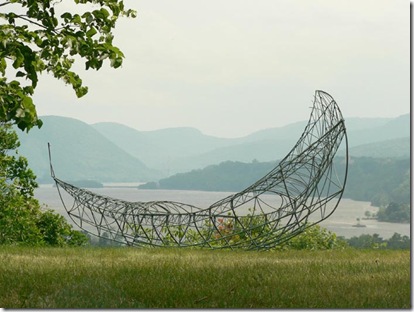 Arden Scott‘s love of the sea and a good yarn has informed her sculpture for many years. The lyrical curves prevalent in her boat effigies allow them to float through space and offer the imagination infinite nautical stories. Although primarily built in heavy materials, her boats retain a delicacy that seems as much like a three-dimensional drawing as a sculpture. Scott began her career as an artist in the sixties, pioneering in the urban wilderness that is now known as Tribeca. She made sculpture out of found materials from constructions sites: the World Trade Center, as it was being built, was an especially fruitful landscape and much debris has been elevated into a position of artistic value in the hands of Scott. Her artwork has been shown in galleries, museums, public spaces and outdoor sites all over the world. Scott has received numerous grants including a Guggenheim Fellowship, and her work has been featured in renowned publications throughout her long career. When she is not in her Long Island studio working on her boats, Scott is sailing the 28′ wooden schooner she built for herself, the Annie.

Amei Wallach profile of the artist in The New York Times (Sept. 1, 2002) – Far From Midtown, She’s Fallen in Love With the Sea

I love everything about this artist work!