Monday was a bad day for historic schooner groundings on both coasts of the United States. 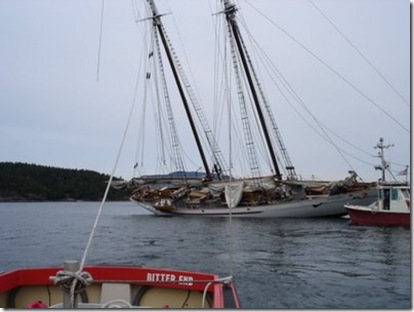 First, the Adventuress ran aground off Orca Island while transiting Wasp Pass in the San Juans off Washington State. Our friend, marine salvor and fellow maritime blogger Captain Richard Rodriguez is all over this story, literally! As you can see from his above photo, his vessel and blog share the same name: Bitter End. Thankfully, that won’t be the result for the Adventuress; no injuries or serious hull damage has been reported. (KING 5 video report)

The U.S. Coast Guard station in Eastport, Maine, says it received a report Monday night that the schooner Sylvina W. Beal had run aground near Indian Island in Head Harbor Passage and needed help. he Coast Guard evacuated the (41) passengers from the 25-metre-long vessel. No injuries or pollution are reported and the coast guard says the vessel is not taking on water.

The good news is that there were no reported injuries, significant damage or pollution in either incident.