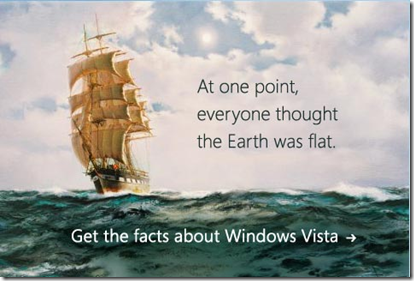 Here’s the latest graphic that was used in an internal Microsoft conference about the upcoming $500 million Windows Vista marketing campaign as reported by the NY Times Bits blog this afternoon (Microsoft Tries to Polish Vista) and ZDNET last night. (First hints of Microsoft’s “fight back” ads appear)

Of course, we love the maritime theme and can only wonder if it was in someway influenced by the American Sail Training Association’s TALL SHIPS CHALLENGE Series which recently made several ports of call in their neighborhood. Probably not but it’s cool anyway. Too bad they didn’t use a photograph of an actual tall ship like the USCG Barque EAGLE or the more local Lady Washington or Adventuress. That could have brought some much appreciated attention to the good work that these vessels do in preserving our country’s rich maritime heritage. And wouldn’t it be great if Microsoft took a few bucks from the $500 million earmarked for this campaign and used it to support the youth programs of these and other Pacific Northwest tall ships.  Now that would be super corporate social responsibility. Okay, I know I’m dreaming but what the heck, it’s worth blogging about.

Like they say, “At one point, everyone thought the Earth was flat.” But then they got on a tall ship and the rest is history (or maybe science).

4 thoughts on “Has Microsoft caught Sea-Fever?”