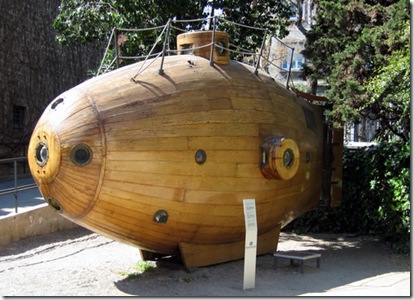 Low-tech Magazine has a really interesting post about the Ictíneo, a series of two wooden submarines built by Narcís Monturiol i Estarrol in the second half of the nineteenth century. (A steam powered fish: the Ictíneo, August 24, 2008)

When I was in high school sailing aboard the SSV Tabor Boy, we once transported an American version of the Ictíneo. Affectionately known as the Turtle, it was built in Connecticut in 1775 by American Patriot David Bushnell with the goal of silently placing bombs/mines on the side of unsuspecting vessels. Wikipedia claims that it was the world’s first submarine used in battle but in fact it was a bit of a dud.

My shipmate and friend, Captain Bob Glover found some great pen drawings that were made during the delivery trip from Connecticut to Boston and posted them on The Tabor Boy Project. Below is a sample with the rest here.

In 2003, Handshouse Studio, “a not-for-profit innovative educational organization, initiates adventurous hands-on projects as a way to explore history, understand science, and perpetuate the arts” built a replica of the Turtle.

In more recent years replica Turtle submarines have made the news with a splash! 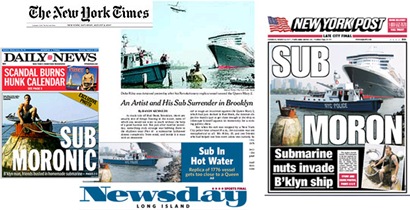