Today I’m excited to introduce you to a guest blogger. Dominic Hix started his maritime career in the US Navy serving almost 10 years in the field of Navigation. He served another 4 years in navigation in the Coast Guard, was a volunteer signalman aboard the Liberty Ship Museum, SS Jeremiah O’Brien, and has spent the last 3 years working as a deckhand aboard tourboats, a dredging company tug and most recently aboard a research vessel. Here’s his story and pictures from a trip he made earlier this week.

The University of Connecticut’s research vessel, the RV Connecticut, is designed to perform as a platform for a variety of projects along coastal waters. With a length of 76 feet, an average draft of 8½ feet and a beam of 26 feet combined with a large working deck she makes a preferable platform for organizations seeking a small, shallow-draft vessel that can still provide adequate working space.

Recently, the Connecticut, acted as a platform for a team of WHOI riggers so that they could swap out some whale monitoring buoys along the Boston shipping lane. These buoys are part of a listening system designed to track the movement of endangered right whales through the busy Boston shipping lane.

The listening system is the result of the combined efforts of Cornell University’s Lab of Ornithology and the Woods Hole Oceanographic Institute and funded by Excelerate Energy L.L.C. (http://www.whoi.edu/page.do?pid=7545&tid=282&cid=40629&ct=162)

This monitoring system consists of 10 buoys placed at 5-mile intervals along the center of Boston’s shipping lane which runs from the western end of Massachusetts Bay out to just east of the Lower Cape off Provincetown. Each buoy has a hydrophone (underwater microphone) designed to pick up noises underwater. All underwater acoustics picked up by the hydrophone are then sorted by a computer on the buoy, transmitted by cell or satellite phone and then sent to a center where Right Whale calls are verified.

Our job aboard the RV Connecticut is to periodically carry fresh buoys and the members of the WHOI rigging shop that put them together out to the shipping channel to swap out the new buoys for the old ones. Working with the team of riggers from WHOI, the crew of the Connecticut transports them to each site and runs the equipment used to take the old buoy out of the water and place the fresh one in.

RV Connecticut left the UConn-Avery Point Campus just outside Groton, Conn around 6am Monday morning and arrived at Woods Hole, Mass by 1400 that afternoon. We began loading the buoys and one mooring anchor on board, finishing by 1600.

That evening at 2100, the crew and riggers departed from Woods Hole, transiting the Cape Cod Canal and headed north through Cape Cod bay, reaching the first buoy, AB-1, just outside the entrance to Boston by 0630 Tuesday morning.

We had a breakfast of French toast and sausage while the boat neared AB-1 at dawn. The temperature was a brisk 30˚ F with the wind blowing out of the northeast at 10-15 Kts. It was definitely weather requiring Mustang Suits or heavy clothing. As the sun began to rise, Connecticut stood off from the first buoy as the deck crew got the working deck ready to retrieve it.

Once the deck and crew were ready, one of the riggers placed a hand-held transducer (Echo sounder) over the side and a signal was transmitted through the water to be received by the buoy’s release mechanism which is used to attach the hose system to the anchor’s chain. The release combines as a spool with a line that remains attached to the anchor’s chain, spooling out as a 30 inch steel sphere floats to the surface pulling up the hose, hydrophone and spool release along with it.

After the steel sphere surfaced, the captain backed the boat up to the buoy. As soon as the buoy was close enough to the stern, a rigger clipped the end of a winch line to the buoy and then 2 tag lines were attached to be used for steady the buoy against the rocking motion of the vessel as the buoy was lifted into the air.

The buoy was brought on deck first. As soon as it was secured to the deck, a hose assembly was hauled up by hand until the steel sphere was close to the stern. The winch line was attached to the sphere and it got pulled on deck followed by a short length of hose and a hydrophone.

A long wire attached to the bottom of the hydrophone was then pulled up until the release and spool mechanism broke the surface. These were retrieved and brought on deck. After that, the line that was on the spool was pulled up hauling the anchor and chain up from the seabed. 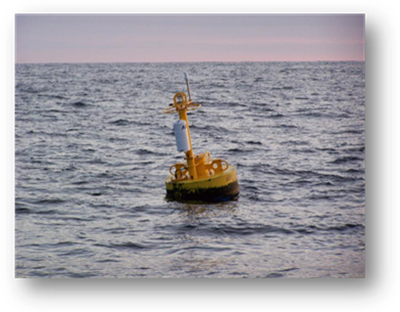 Buoy waiting for release command from the boat. 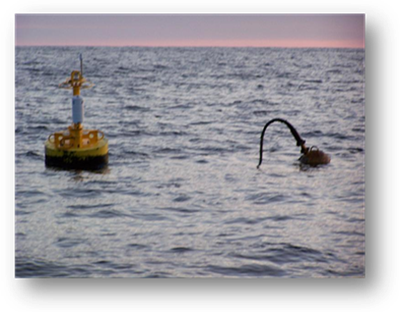 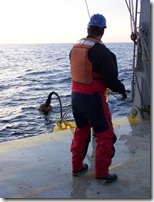 Hooking the winch line to the buoy for hauling the buoy out of the water. 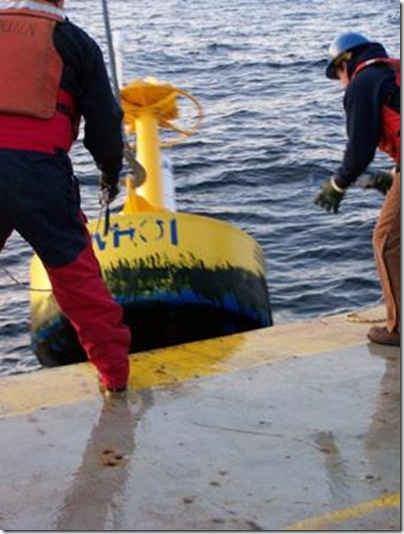 Clipping tag lines to buoy to control swinging when buoy comes out of water onto a moving deck. 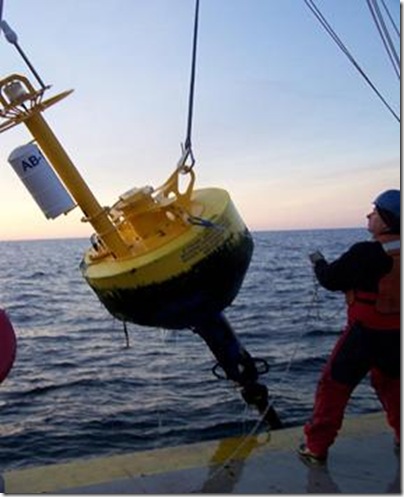 Controlling swing of buoy as it’s brought on deck with winch and A-Frame.

Next comes the steel sphere… 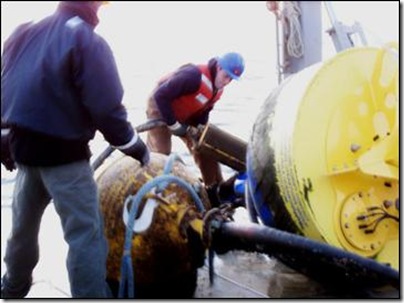 Then comes the Hydrophone…

The release with line pack is brought up next. Though the spool has detached from the anchor’s chain, line from the spool is still attached to the chain allowing for retrieval of anchor as well. 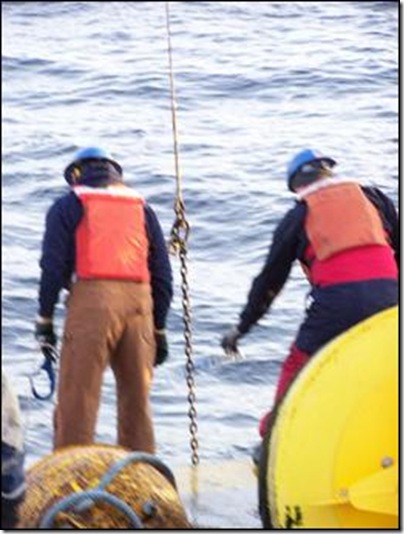 …and finally the chain with the anchor attached to the bottom is brought up.

The sphere and hose assembly gets a good power-wash to get all the sea creatures off the parts that stay underwater. After that, they get reattached to the new buoy and have a new release attached between the hydrophone and mooring anchor…

Every part goes back in the same order it came out. We rotated 5 sets of buoys that day completing the project by 1700.

Buoy, gumby hose and steel sphere are placed into the water first… 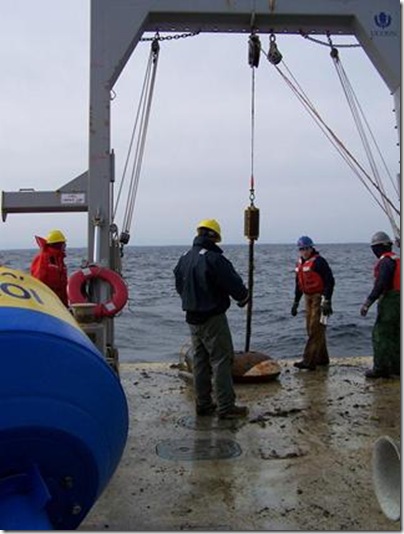 Followed by the hydrophone…

Next goes the new release with line pack…

Then finally the mooring anchor.

Note the buoy in the background trailing through the water. The anchor will be lowered just below the surface of the water and once it passes over the spot where the buoy will be stationed, it will be released, freefalling to the seabed. It will pull the buoy forward as it falls, dragging it across the surface until it is directly over the mooring buoy.

Schematic showing the buoy and its mooring system 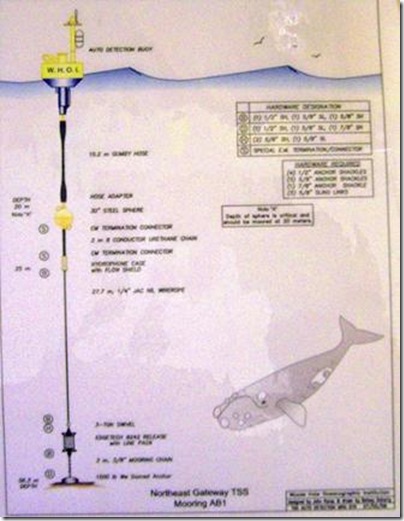 I had the opportunity to relieve the captain at the wheel for a few minutes as we were heading for the very last buoy of the day, buoy AB-5. When the boat was a half mile from the buoy, I spotted several whale spouts, one close to the buoy. Turns out they were Fin Whales, but it was exciting knowing there was some type of whale out there while we were working.