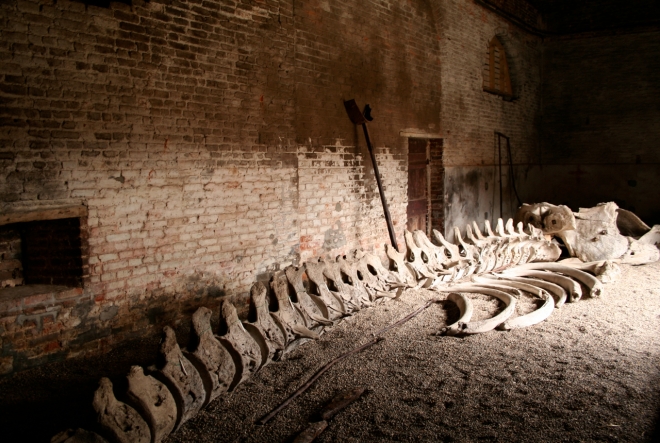 We just got word from Yorkshire that the sperm whale skeleton described in Chapter 102 of Moby-Dick is once again on display at Burton Constable Hall, the same English country house where author Herman Melville located it in 1851. Melville described the skeleton as “articulated” and capable of being swung open and shut “like a great chest of drawers.” He also wrote of a plan to install locks on the skeleton and charge up to sixpence for a peek at it.

The whale as currently constituted—in a new, permanent display after years in storage—still seems to be awaiting its locks, but we don’t advise “swinging all day upon his lower jaw,” even though Melville said you could. The viewing fees, while more than sixpence, sound reasonable: Admission into the estate’s grounds (where you can see the whale) is £2.50 for adults; £1.25 for children; and £6.25 for a family ticket. Burton Constable is open three seasons of the year, including every day but Fridays through October 29. (It opens again from November 21 through December 6 before shutting until Easter.)

One thought on “Moby Monday — A Bower Near Withernwick”