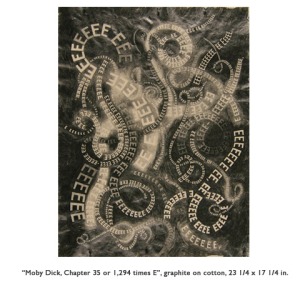 For the past two years, Minnesota artist Justin Quinn has been transcribing and transforming passages from Moby-Dick into intense, swirly drawings, prints, and collages. One catch for would-be readers: he changes every letter he copies into the letter “E.”

The point, Quinn says in a statement, is to explore “the space between reading and seeing”—to create with his E’s a “vacant language” parallel to the language of the source. He chose Moby-Dick as his text because its “story rich in theology, philosophy, and psychosis provides me with a roadmap for my work, but also with a series of underlying narratives.”

When I contacted Quinn, he had been thinking a lot about Chapter 35: “The Mast-Head,” which discusses the long, lonely hours that whalemen would spend keeping watch for whales’ spouts. Quinn compared his own labors to these. “Lost in my own thoughts (much like the whale-fishers) I am accumulating time in the studio, and the characters can read as a tally of my time,” he wrote in an email.

Quinn’s latest Moby-Dick works will be on exhibit from November 19 through December 23 at the Cain Schulte Gallery in San Francisco, with an artist talk at 7 p.m. on the opening night.

One thought on “Moby Monday — The Greatest of E’s”