The overwhelming favorite of last year’s (Sea)cret Santa Series is back and ever sensitive to the economic challenges facing all Americans, including so many professional mariners, Jack Tar magazine has made this instant classic cheaper than ever. Pardon the puns, but at $16.99 this recession “buster” is a real “stimulus package.” On top of that, these women can literally “bail out” themselves, thank you very much! 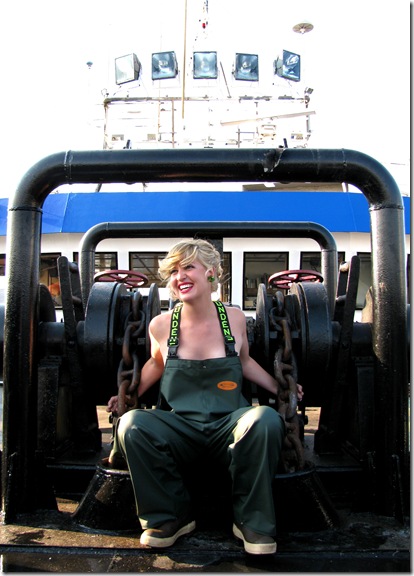 All kidding aside, Kim Carver, Jack Tar’s publisher is a dedicated professional mariner, as are all of the women in the Women of Maritime 2010 calendar. From her recent posting on Facebook, here’s who you’ll find inside:

Weronika, a polish beauty who sails the big full rigged ships like Christian Radich and Pallada.

Diana, a maritime museologist, currently working on and archiving materials on the decommissioned steam-powered lightship, where her photo was taken.

Tammy sails her own boats, volunteers to take sick kids out sailing and repairs diesel engines!

Meegan (above), just got out of the Navy after 8 years, graduated with a degree in Fisheries Management, went to work on a salmon fishing boat this past summer, and is now cage diving while studying Great White sharks in South Africa.

Allison, Pride of Baltimore crew – one of her friends recommended this awesome pic of Allison to put in the calendar and I couldn’t resist.

Sara, all around go-to crew for Gray’s Harbor Historical Seaport and also Bill of Rights. Married to well-loved Captain Jeremiah and mom of “Tiller.”

Christy, to whom I’ve dedicated the Lonely Island song “I’m on a boat” to. She was raised racing, cruising, and helping her dad do deliveries. Currently sailing the seas and exploring with her fiancé. When in Seattle she’s an active member of the Puget Sound Sailing Group and also loves taking disabled kids out sailing with their caregivers.

Kristin, a world traveler, kite surfer and sailor whom I met while she was sailing the West Coast in an Ingrid design. She’s currently kite surfing in La Ventana, Mexico, and preparing to explore more of the world while crewing on OPB’s.

Elaine, her 2nd year in the calendar, has already passed her tests for 500 ton master, crossed the Atlantic from Africa, sailed to Hawaii, amongst many other cool places.

Cass, a shipwright and avid bicyclist (but not the ridiculous spandex kind) just finished an apprenticeship at Seattle’s famed Center for Wooden Boats, helps manage a nautical book store, loves to go sailing, and volunteers aboard traditional boats.

And Miss December is again Lia, back by popular demand. She’s a fisheries biologist crewing aboard a classic 1932 wooden vessel as the on-board naturalist during the summers. She also just started her own business, and is definitely one the busiest (and prettiest) women I know!

Order your 2010 Sexy Women of Maritime calendar before Santa’s elves pilfer the pallet!

PS – Listen for Kim on upcoming episodes of Messing About In Ships podcast as we re-launch in 2010!

One thought on “Sea(cret) Santa Series (24 days): Sexy Women of Maritime Calendar is back!”