This week’s guest Moby-Monday is by Evander Price, Senior English & Art History Major at Vassar College and former New Bedford Whaling Museum intern, along with a strong pull of the oar by Jeffrey Walker, Professor of Earth Science at Vassar College.* 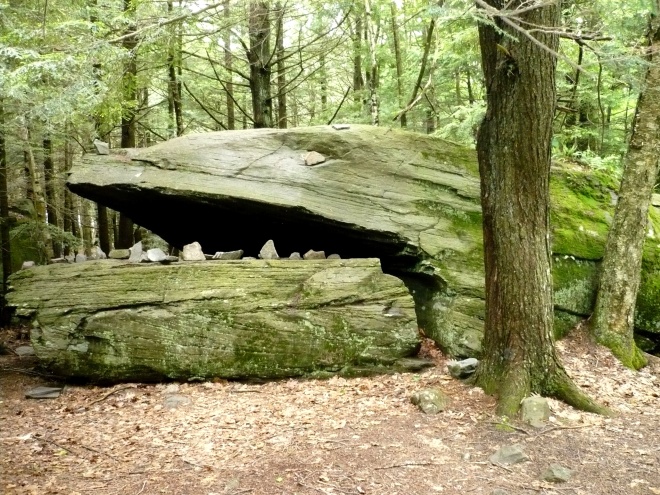 In bony, ribby regions of the earth, where at the base of high broken cliffs masses of rock lie strewn in fantastic groupings upon the plain, you will often discover images as of the petrified forms of the Leviathan partly merged in grass, which of a windy day breaks against them in a surf of green surges.

Moby-Dick, Chapter 57, “Of Whales in Paint; in Teeth; in Wood; in Sheet; in Stone; in Mountains; in Stars”

High up in the Catskills, though not too high, and not too far off from the historic Mountain House, lie the petrified remains of perhaps the oldest beached whale on our planet.  He is composed of 350-million-year-old sandstone of the Catskill delta, and is surrounded by hemlocks.  No doubt he remembers the time when the Hudson River Valley was almost entirely hemlock, before the demands of the Industrial Revolution deforested the old growth trees.  While his mossy bulk has no doubt morphed considerably with the erosion of time, his toothy lower jaw corroborates his classification as an odontocete, and the prominence of his jaw further suggests that he is of some close relation to the physter macrocephalus, or the sperm whale.

It is discoveries like this that remind us readers of Melville that what might be taken for exaggeration or imaginative literary flourish is often pure fact.

*Credit to Jeffrey Walker, Professor of Earth Science at Vassar College for all geological information, and for leading the hike to the petrified whale.

Chapter 57 – Of Whales in Paint; in Teeth; in Wood; in Sheet; in Stone; in Mountains; in Stars

In bony, ribby regions of the earth, where at the base of high broken cliffs masses of rock lie strewn in fantastic groupings upon the plain, you will often discover images as of the petrified forms of the Leviathan partly merged in grass, which of a windy day breaks against them in a surf of green surges.

Then, again, in mountainous countries where the traveller is continually girdled by amphitheatrical heights; here and there from some lucky point of view you will catch passing glimpses of the profiles of whales defined along the undulating ridges. But you must be a thorough whaleman, to see these sights; and not only that, but if you wish to return to such a sight again, you must be sure and take the exact intersecting latitude and longitude of your first stand-point, else so chance-like are such observations of the hills, that your precise, previous stand-point would require a laborious re-discovery; like the Solomon islands, which still remain incognita, though once high-ruffed Mendanna trod them and old Figuera chronicled them.

It was a black and hooded head; and hanging there in the midst of so intense a calm, it seemed the Sphynx’s in the desert. “Speak, thou vast and venerable head,” muttered Ahab, “which, though ungarnished with a beard, yet here and there lookest hoary with mosses; speak, mighty head, and tell us the secret thing that is in thee. Of all divers, thou hast dived the deepest.

The same secludedness and isolation to which the schoolmaster whale betakes himself in his advancing years, is true of all aged Sperm Whales. Almost universally, a lone whale – as a solitary Leviathan is called – proves an ancient one. Like venerable moss-bearded Daniel Boone, he will have no one near him but Nature herself; and her he takes to wife in the wilderness of waters, and the best of wives she is, though she keeps so many moody secrets.

In the second engraving, the boat is in the act of drawing alongside the barnacled flank of a large running Right Whale, that rolls his black weedy bulk in the sea like some mossy rock-slide from the Patagonian cliffs. His jets are erect, full, and black like soot; so that from so abounding a smoke in the chimney, you would think there must be a brave supper cooking in the great bowels below. Sea fowls are pecking at the small crabs, shell- fish, and other sea candies and maccaroni, which the Right Whale sometimes carries on his pestilent back. And all the while the thick-lipped Leviathan is rushing through the deep, leaving tons of tumultuous white curds in his wake, and causing the slight boat to rock in the swells like a skiff caught nigh the paddle-wheels of an ocean steamer. Thus, the foreground is all raging commotion; but behind, in admirable artistic contrast, is the glassy level of a sea becalmed, the drooping unstarched sails of the powerless ship, and the inert mass of a dead whale, a conquered fortress, with the flag of capture lazily hanging from the whale-pole inserted into his spout-hole.

4 thoughts on “Moby-Monday: Of Whales in Mountains…”