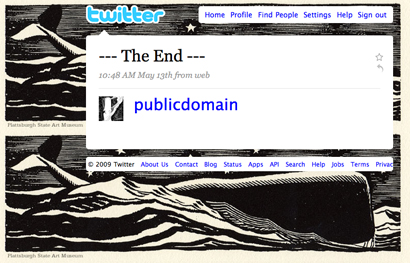 “How many tweets would it take to tweet all of Moby-Dick?” cartoonist Adam Koford mused on Twitter last July.

The answer, it turned out, was 12,849, or about 45 Twitter posts per day for nine-and-a-half months—as programmer Dan Coulter, a Twitter follower and prior collaborator of Koford’s, discovered after he took the cartoonist’s question as a challenge.

Coulter’s robotic Moby-Dick Twitter feed started on July 28 and ended last Wednesday, May 13. While it was running, the robot (a script Coulter wrote in the PHP computer language) spit out one paragraph of Melville’s beloved and dreaded tome every hour during the business day, with the text sliced into Twitter’s signature 140-character-max dispatches. The account—with Twitter handle “publicdomain”—has attracted 418 followers, and today it begins blurting its next out-of-copyright text, Lewis Carroll’s Alice in Wonderland.

Why start with Moby-Dick? Koford says he was inspired by Twitter’s “fail whale,” the blissed-out white cetacean that appears onscreen whenever the micro-blogging network is overloaded. Though he had never read the full book on paper, Koford says, he’d read an “amazing” graphic adaptation by Bill Sienkiewicz. He had also endured an audiobook version narrated by actor Burt Reynolds. “He basically screams the whole book,” Koford recalls in an email. “Looking back, I’m not sure how I made it through that.” Still, Koford says, he loved the book.

Programmer Coulter was less enthusiastic. “I’m not a Melville fan,” he confesses. “I tried reading Billy Budd once, and I got about five pages into that. The language and the pacing has never been able to grab my interest.”

Reading 140 characters at a time, however, Coulter made it through Moby-Dick. And with the text in that format, he was able to appreciate Melville’s artistry with language. “It surprised me how poetic he could be at times,” Coulter says. “Stuff would come through that was really amazing.” Even more than the poetry, though, Coulter appreciated the humor inherent in the medium. “Twitter turned the book into this weird series of non-sequiturs—things that, taken out of context, were absolutely hilarious,” he says. “I don’t know that I would ever want to read Moby-Dick as a book, but as a Twitter feed, I really enjoyed it.”

A list of Coulter’s favorite funny Moby-Dick tweets appears in a wrap-up he posted to his blog last week. Fans of the book may recognize a few lines that are as amusing in context as out. This July 31 tweet, for example, follows narrator Ishmael’s first encounter with Queequeg, the Polynesian harpooner: “But I don’t fancy having a man smoking in bed with me. It’s dangerous. Besides, I ain’t insured.”

On Thursday we got a call from Luke’s (5) daycare that they would be closed on Friday because electricity had to be turned off in that part of town for a few hours. A little while later my mother called to say that she couldn’t babysit Joy (3) like she does every Friday because she and my father had to attend a funeral. My wife Jenny has been extremely busy with work over the past few weeks so that left me to entertain our little people. Uh, oh! Thank god for friends! More on that in a bit.

Thursday night Luke and I took my podcasting partner, gCaptain CEO/blogger and friend Captain John Konrad with us to a book signing at The Book Stall in Marion. Another friend, Randy Peffer, is an English professor at Phillips Academy Andover and prolific author. His newest book is titled Old School Bones; fortunately for Randy, but unfortunately for us, the book signing was so successful that he ran out of books by the time we arrived so we had to back order it.

Randy also has several great maritime themed works including Watermen, a classic, and Logs of the Dead Pirates Society: A Schooner Adventure Around Buzzards Bay, one of my all time favorites. As its name suggests, Logs chronicles a sail training adventure with Andover students around Buzzards Bay on Randy’s Nova Scotia schooner Sarah Abbott. He also has a US Civil War maritime series coming out later this year. Randy writes!

At the book signing Randy asked if we wanted to go sailing Friday. Well, Captain Konrad unfortunately had to work but the little people and me were free so we took him up on the offer. Saved by sailing!

What an great day we had on Buzzards Bay. Here are a couple of pictures and a short video (the sound is terrible but you get the idea what kind day it was on the bay.) 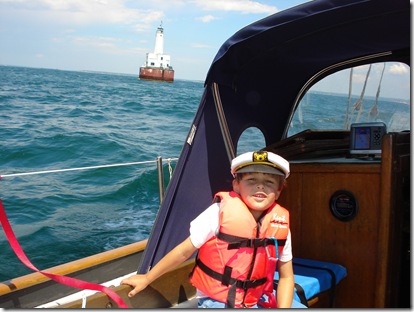 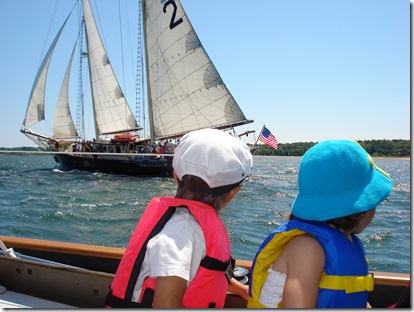 Those are all great books for your maritime library. Of course, make sure you also have Watermen and Logs of the Dead Pirate Society too!

Finally, if you need more to read this summer, Bookmarks Magazine had a great article in August 2006 entitled 101 Crackerjack Sea Books by Dean King. This list should keep you busy for a while!

This morning while at Logan airport for an early flight to Bermuda I stopped by Borders and picked up Dan Pink’s new book, The Adventures of Johnny Bunko – The Last Career Guide You’ll Ever Need. I like the marketing campaign for this book is which pretty unique and intriguing; here’s a YouTube video.

Written in the popular Japanese manga style, The Adventures of Johnny Bunko is a quick and easy read and perfect for a short flight to Bermuda. Pink lays things out in six lessons:

Okay, it’s not Good to Great or In Search of Excellence, but it is a fun book with some useful, if common sense, advice and the manga (cartoon) style is entertaining and engaging. While it clearly won’t be everyone’s taste, it does take a dry and much written about subject and presents it in a fresh and innovative fashion. Even if it doesn’t help you examine your career track, you can use it as a catalyst or inspiration for looking at things from a new and bigger perspective, just like Johnny ends up doing with his “Charger” shoes during Lesson 5.

Here’s a YouTube video of an excerpt of an interesting interview with Pink about the book.

I recommend this book for anyone interested in exploring an age old personal dilemma in a new way. It’s an easy, fun and quick read that just might set off a spark of new thinking.

The Adventures of Johnny Bunko blog

One of my regular reads is the 800-ceo-read blog, which does great news and reviews on business books. Yesterday they were pleased to point out that a discussion ensued during Monday Night Football about a business book. (I missed it but it must not have been a very exciting game.)

But this wasn’t just any old business book; it was about Mike Abrashoff’s It’s Your Ship.

Here’s a reprint of the transcript from 800-ceo-read.com:

END_OF_DOCUMENT_TOKEN_TO_BE_REPLACED

If you are a sailor or dream about sailing, this is the book for you!

Fifty Places to Sail Before You Die – Sailing Experts Share the World’s Greatest Destinations is the third volume by author Chris Santella on some of our favorite pastimes. His first, Fifty Places to Flyfish Before You Die, was born from a personal passion. It was a great hit and soon spawned Fifty Places to Golf Before You Die which is a must-read and fun check list of some of the world’s most spectacular golf courses. His next logical subject was sailing. END_OF_DOCUMENT_TOKEN_TO_BE_REPLACED

Over the past week we have been on a family vacation in Grand Cayman staying in beautiful condo in the Rum Point section of the island and minutes walk away from the beach. This is our first trip here and I can’t recommend it enough. (Blog and photos.)

It’s also a great place to read and I finally had the chance to sit down with Michael Useem’s newest book, The Go Point. I am really interested in his work and enjoyed several of his earlier books including Upward Bound: Nine Original Accounts of How Business Leaders Reached Their Summits (with Paul Asel), Leading Up: How to Lead Your Boss So You Both Win and The Leadership Moment: Nine True Stories of Triumph and Disaster and Their Lessons for All of Us.

Michael Useem is the Wiliam and Jacalyn Egan Professor of Management at the Wharton School, University of Pennsylvania, as well as the director of its Center for Leadership and Change Management.

In October 2005, I had the good fortune to participate in Wharton’s Executive Education Program The Leadership Journey which is lead by Professors Useem and Greg Shea. As its name implies, its is a weeklong intensive experience uniquely exploring leadership from academic and personal perspectives. This was clearly one of the most significant adult learning experiences that I have ever had and I was looking forward to reading The Go Point. END_OF_DOCUMENT_TOKEN_TO_BE_REPLACED

I just finished Mavericks at Work: Why the Most Original Minds in Business Win by Bill Taylor and Polly LaBarre. I received a copy of the book when I attended the Business Innovation Factory’s BIF-2 last October in Providence, RI. Mr. Taylor was one of the speakers and a video of his presentation can be viewed here.

Mr. Taylor was cofounder and founding editor of Fast Company, a magazine which I have subscribed to since its inception. His co-author, Polly LaBarre, also spent eight years as a senior editor of Fast Company and was a co-host of their Real Time conferences. END_OF_DOCUMENT_TOKEN_TO_BE_REPLACED