Update (Oct. 17, 2007) – Oliver Moore of the Globe and Mail wrote “Stories don’t add up in death at sea – Company disputes investigator’s claims that crew was too tired, understaffed” According to the article, the Picton Castle has issued a press release refuting each of the safety issues cited in the Transportation Safety Board’s letter to the Cook Islands Maritime Authority about the casualty.

Update (Oct. 16, 2007) – CBC News reports that Picton Castle owners, Windward Isles Sailing Ship Company have responded to the Transportation Safety Board of Canada’s letter “disputing claims there were safety and operating violations when Laura Gainey was swept overboard and lost at sea.”

This story focuses on a letter issued by the Transportation Safety Board of Canada about an incident that took place last December aboard the tall ship Picton Castle when Laura Gainey, a trainee/crew member, was washed overboard by a rogue wave. The vessel was making a transit from Lunenburg, NS, Canada to the Caribbean to prepare for the filming of the CBS’s short lived reality TV series, Pirate Master.

While the Picton Castle hails from Lunenburg, NS, she is registered in the Cook Islands whose maritime authority has responsibility for investigating the casualty; they have not yet made their report public.

According to the National Post article, the Transportation Safety Board of Canada’s letter states that Gainey had been up for 22 hours before the incident which may have caused her to be fatigued and been a contributing factor to her death. Additionally, the article states that the letter cites “a number of “safety issues,” including a lack of marine emergency training among the ship’s crew; absence of emergency crew drills; and the fact that crew did not make a regular practice of wearing safety harnesses on deck at night or during inclement weather while the ship was sailing.”

This was a tragic case for all involved, most especially the family, friends and shipmates of Laura Gainey. However, it must serve as a sober reminder that going to sea always has and always will carry a certain level of risk. It is an alien environment that challenges us and that is one reason why it is such an incredibly powerful teaching platform and learning experience. We need to take every step necessary to effectively manage, mitigate and eliminate the risk. After that, we must be forever vigilant regarding our own personal safety and that of our shipmates and the seaworthiness of the ship and her endeavour.

Again, our hearts and thoughts go out to Laura’s family, friends and shipmates. 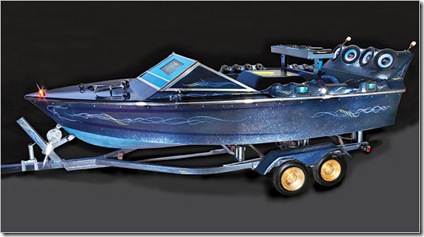 Part floating multimedia art installation, part “Pimp My Ride,” the thoroughly customized 1977 Correct Craft ski boat is a nautical interpretation of Chicano low-rider culture by the Chicago-based artist Dzine. Working with the high-end car outfitter LP MotorSports, he tricked out the “Dnipro” with 22 speakers, 9 TV screens, 8 amps, state-of-the-art Pioneer D.J. equipment, a laser light show and a smoke machine. The craft made its maiden voyage at this year’s Venice Biennale in the Ukrainian Pavilion and is set to sail again on Oct. 9 in Rome, christened by a performance by DJ Solal and Filip Wauters.

For more information, go to www.contemporaryartssociety.com.

You won’t be gutting stripers on this baby.

In the off chance that Sea-Fever readers don’t already know, there is a great website called gCaptain.com that has so much interesting and valuable information that it is destined to become the one stop shop for maritime news. One section of the website is called Discoverer which is a maritime version of Digg where you can “discover, share and vote” for your favorite stories.

In September gCaptain.com is running a contest with valuable iPrizes. I was lucky to just edge out some other really great contributions for the 3rd place prize and I won an iPod Shuffle. The grand prize is an iPhone. Very cool! END_OF_DOCUMENT_TOKEN_TO_BE_REPLACED

It was hard to believe what was unfolding six years ago this morning. In our modern media saturated world, it was presented to us in real time and then repeated over and over again like a horrific groundhog day. But as difficult as these images are, they are impossible to forget which is probably good because the events of those hours effectively defy words.

The New York maritime community responded to these attacks in heroic fashion which probably surprises no one who reads Sea-Fever. Here is a US Maritime Administration video entitled “Honoring the Living Heroes of the United States Merchant Marine.”

There is a small website called HarborHeroes.org that commemorates the maritime professionals, vessels and companies who responded that fateful day. On it there is a powerful piece by Andrew Greeley from the Chicago Suns Times of September 6, 2002 entitled Media ignored calm amid the 9/11 chaos. This short essay does a remarkable job in capturing the essence of leadership that exists in every individual and society’s ability to face an adaptive challenge of monumental proportions.

Crossposted at Sea-Fever blog and the Center for Leader Development blog.

One of the most dramatic and photographic maritime casualties in recent years involved the Pasha Bulker which ended up on the Nobby’s Beach in Newcastle, New South Wales, Australia. I hadn’t been able to find footage of the successful salvage efforts until late the other night. Check it out.

END_OF_DOCUMENT_TOKEN_TO_BE_REPLACED 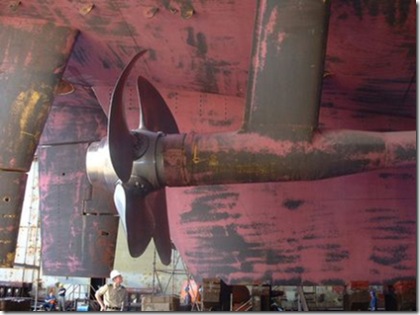 Treehugger.com reports that the EPA has finally banned a substance that is considered one of the most toxic substances ever released into the world’s oceans.

Tributyltin, a type of biocide, is a cheap and powerful barnacle and algae killer that was once commonly used on most of the world’s commercial ships. It is typically mixed into the bottom coating for hulls, where it helps keep the ship clear of barnacles and other similar species. TBT is highly prized by sailboat racers and yachtsmen who use it to make their hulls move more easily through the water and by certain environmentalists, who argue it can help prevent the spread of invasive species from one port to another.

According to the post, every major US and European paint company stopped using the substance in 2001 and endorse the maritime treaty banning it. China and other developing maritime nations would seem to be the target here.

Good news for our Oceans!

Leading Questions is one of my regular reads and yesterday Ed Brenegar wrote a great post Sailing with a World Class Leadership Team in which he profiles his friend Peter Grimm, a superyact crew chief. 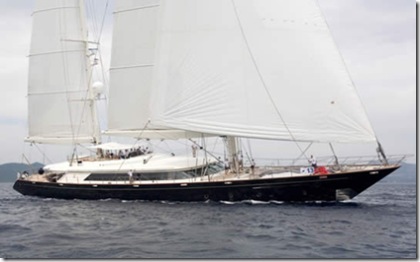 Perseus, the superyacht mentioned in the article and pictured above was built by Perini Navi, the same yard that built the Maltese Falcon which I posted about yesterday.

These are very impressive vessels; however, over the past decade the superyacht industry has grown so rapidly that there is a looming crisis in finding qualified crew to man them. (Read about it here.) One of Sea-Fever’s objectives in creating and delivering youth sail training programs like the ones chronicled in this blog (here, here, here, and elsewhere) is to introduce young people to maritime careers. Of course, our number one objective is to give these young people life changing experiences that teach valuable lessons about respect, teamwork, leadership and so much more. In the long run, the benefits of these programs can be far reaching. The superyacht owners and operators should take more notice of them because the future of their vessels could depend on it.

Joe Morgenstern reviewed the new film Deep Water. (You can watch the trailer here). This documentary chronicles the ill-fated journey of Donald Crowhurst, an amateur British sailor, in the 1968 solitary nonstop sailboat race around the globe.

As Crowhurst’s situation grows desperate, the scope of the film expands — from a good yarn to a haunting, complex tale of self-promotion, media madness, self-delusion and, finally, self-destruction.

Also in yesterday’s Wall Street Journal, Pete DuPont reviewed David A. Kaplan’s new book, Mine’s Bigger: Tom Perkins and the Making of the Greatest Sailing Machine Ever Built. The Maltese Falcon is one of the largest and most technologically sophisticated sailing ships in the world. She is owned by Silicon Valley venture capitalist Thomas J. Perkins who has had a passion for sailing all his life.

Kaplan also wrote a piece about the Maltese Falcon in the July 2007 issue of Wired entitled Extreme Sailing: The Biggest Boat in the World which is worth a read.

The Spare Times column in today’s NY Times has a great lead for a free outdoor activity in the Big Apple. Kayaking on the Hudson by Stephanie Goodman tells you how to get on the water for free at the The New York City Downtown Boathouse.

There ain’t a lot of things for free in NYC so don’t miss this one.

For an interesting blog about kayaking and NYC check out frogma. Also, check out tugster: a waterblog for an incredible chronicle of life in NY harbor.

Hmm. Not so sure about this idea from a former Russian vodka salesman and convict.

Thanks to WSJ.com via Brightcove