Google’s homepage has a salty flavor today! Check it out while you can because it has a fun interactive element to explore.

I recently discovered a new blog called The Scuttlefish. It’s good, you should go there.

I love TED Talks and we’ve featured a bunch of them here on the Sea-Fever blog. Next Saturday, October 16, 2010 is TEDx Woods Hole: xPlorations so Luke and I are planning to head over and check it out. Check out their website and Facebook page. It’s a free event open to the public so if you’re floating around Cape Cod, you might want to check it out. Here’s the awesome line up:

MBL Director and CEO Gary Borisy will host the afternoon event, which will feature the following speakers and performers:

TEDx is a new program that enables local communities such as schools, businesses, libraries, neighborhoods or just groups of friends to organize, design and host their own independent, TED-like events.

Here’s an amazing photo making the rounds on Facebook.

The photo has been “attached” to an even more amazing old San Francisco Chronicle story, which Snopes confirmed as true; but I don’t believe that the photo is of the same whale.  Both still cool all the same!

You buy this cool new HD waterproof sports video camera and you head out on your kayak to test it out. Here’s what you see. How do you act?

One of my absolute favorite podcasts is WNYC’s RadioLab. This week they tell the story of The Luckiest Lobster. It’s a good one; take 15 minutes and give it a listen.

This really is not an isolated incident. Lots of people rescue lobsters and many tell their unique stories over at Maine Lobster Rescue. Here’s the “moving” story of Arizona Larry.

There’s a tight and surprising link between the ocean’s health and ours, says marine biologist Stephen Palumbi. He shows how toxins at the bottom of the ocean food chain find their way into our bodies, with a shocking story of toxic contamination from a Japanese fish market. His work points a way forward for saving the oceans’ health — and humanity’s.

Hans Stråberg, the President and CEO of Electrolux, explains the reasoning behind Vac from the Sea:

Our oceans are filled with plastic waste. Yet on land, there is a shortage of recycled plastic. The supply of sustainable raw material, such as recycled plastic, is crucial for making sustainable appliances, and assisting consumers in making their homes greener. I therefore hope people will join us in raising awareness about the threat plastic poses to marine habitats, and the urgent need for taking better care of the plastic that already exists. 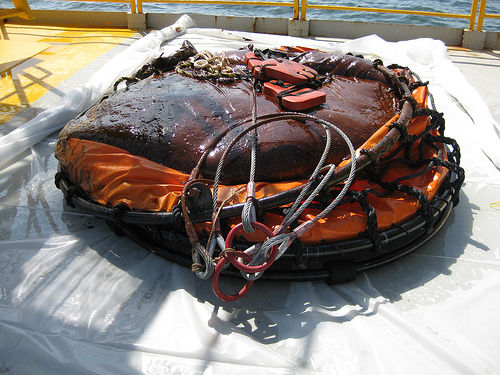 Wow! A one ton tar ball from the BP oil spill.

The troubling part is that they are actually showing us this. Imagine what we aren’t seeing! :(

You might recall our first “It’s An Ocean Out There!” post, “Sea Lion vs. Octopus” and our second, “Octokleptomaniac.” Well, it’s still dangerous “out there” as you will see in this National Geographic video: “Shark vs. Octopus.”