I originally posted this 2 years ago today. I think it’s definitely worth revisiting.

Thirty three years ago today the SS Edmund Fitzgerald was lost with 29 souls. Here’s a very moving video about this tragic event.

At the recommendation of the Just One More Book podcast, last year I purchased the children’s book The Edmund Fitzgerald: The Song of the Bell for my then 4 year old son Luke who not surprisingly loves ships. (Listen to the podcast here) The book is beautifully illustrated and the authors do a great job telling the story of this magnificent ship and her loss. Death can be a challenging subject for young children but the authors handle it superbly. I highly recommend it.

The fateful voyage of the Edmund Fitzgerald by Jenny Nolan / The Detroit News (Nov. 11, 1975) 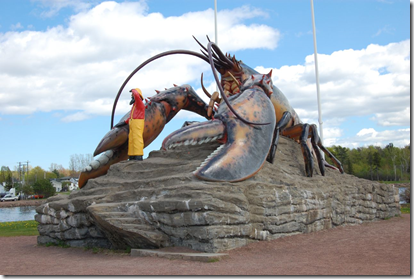 Earlier today Canadian Maritime Lobstermen got a surprise when they called a government number regarding financial support for the struggling industry. According to The Canadian Press:

Maritime lobster fishermen in need of financial help got a lift of another kind Tuesday when they were directed to a toll-free number that was supposed to detail an aid package but connected them to a lusty sex line instead.

One of the several toll-free information numbers released by Fisheries Minister Gail Shea hooks callers up to a sex line that offers fishermen nary a detail on the lobster stimulus package.

(A spokesperson) said he didn’t know how many people had called before the correction was made, but added that the department hadn’t received any complaints.

Plouf! was also a performance art piece by Julien Bismuth and Jean-Pascal Flavien on the Thames River in London for and in front of the Tate Modern on February 21, 2009. This video is part of the great Bloomberg TateShots short video podcasts series. From the website:

On a rare, almost miraculously sunny day in London, TateShots and a group of art lovers boarded a boat and sailed out onto the Thames. We were there to see a work by Jean-Pascal Flavien and Julien Bismuth, the splashily named Plouf!, which was first performed in the sea off Rio de Janeiro. The work consists of Flavien and Bismuth, who are on another, smaller boat, reading through a megaphone, signing semaphore and flashing morse code: a poetic tale of loneliness and loss at sea.

This week I interview Nick Jaffe (Twitter @bigoceans) about his solo sailing adventures and sponsorship challenge from the social media / online crusing guide BlueMapia.  Please register (for free) for BlueMapia and plot a few points of interest on their online cruising guide to help raise some sponsorship for the remainder of Nick’s adventure

Music: So Far Down by David Usher

Shownotes @ Messing About In Ships blog

This week John interviews Stas Magaronis, President of Santa Maria Shipowning and Trading about green and short sea shipping and the marine highway. Music: Radioghost by Norwegian Recycling from Mashuptown.com

Shownotes @ Messing About In Ships blog

Just 22 shopping days left and Sea(cret) Santa is here to help with some some nautical gift and stocking stuffer suggestions.

From the Massachusetts Bay Trading Company:

This combination instrument features a quartz clock movement and a high quality tide clock in one package. The wall-mounted unit is framed in solid wood with a glass cover. The frame is made from poplar wood that is given a quality maple finish. The clock movement runs on AA batteries. Dimensions- 9 inches wide x 17 inches high. The wooden frame is approximately 3/4″ wide.

The combo instrument background nautical chart may be customized for any area of your choice, including the Great Lakes. Specify the location you would like for the background in the space provided above. Be as specific as possible. Please be sure to include a town or feature that you would like to be near the center of the chart. The default background, if you do not specify one, is the Boston harbor. Depending on the map, it will be mounted either vertically or horizontally. If you require specifically a vertical or horizontal orientation, please specify it in the text area above, along with your requested region for the background. Generally ships in 1 – 2 weeks. Price: $115.

Keep your mariner current with this gift!

The financial crisis is creating some rough waters in the shipping industry.

Here’s what By CHUIN-WEI YAP and MOHAMMED HADI had to say in the Heard on the Street column (Credit Crunch Meets Global Trade, Oct. 29, 2008)

Evidence is mounting that the credit crunch is obstructing global trade.

The beat got louder as the Baltic Dry Index of shipping rates plunged. It’s now down more than 90% from its mid-May peak.

Then the Globus Maritime shipping company said on Friday it had to sell one of its ships for 29% below an earlier agreed-upon price. Globus, which is listed on London’s AIM exchange, blamed falling shipping activity and increasing difficulties in securing trade finance.

Broadly, shipping and commodities markets are rife with talk that banks are refusing to honor letters of credit from other banks and holding back guarantees commodity buyers and sellers need to ship all manner of metals and soft commodities.

Spurring some of the chatter early this month were the widely disseminated, gloomy remarks of a Thai shipping executive at an industry conference in Singapore. His view — that credit was frozen — was echoed by Moody’s Economy.com, which last week said stocks were piling up as cargo ships got stranded at ports pending the flow of financing. A Maersk Broker report made similar points.

The near-cessation of global credit is at the root of this particular rout.

Also in today’s Wall Street Journal, MARSHALL ECKBLAD wrote an article titled Shippers Hit by Credit Crunch where in he describes the trickle down effect of tightening credit on global shippers. END_OF_DOCUMENT_TOKEN_TO_BE_REPLACED

I love photography. I love the Internet. Put the two together and you’ve got something that rivals this.

One of the greatest things about it is the wide range of styles that you can experience. Some like our friend OneEighteen are artists behind the lens and others, like another good friend, Tugster, are comprehensive documentarians. ClydeSights falls in the latter category.

While Tugster’s backdrops are the manmade mountains of Manhattan, ClydeSights are god’s version in Scotland. The full blog title is ClydeSights – Contemporary local shipping on the Clyde and the website says:

The ClydeSighter is a shipping enthusiast, who spent several years at sea sailing around the world before taking up employment with a local company.

Just like when visiting with Tugster, I can find my self lost for hours checking out the ships that work The Clyde. These photographers do a wonderful job of capturing our maritime heritage for future generations. Check it out.

The above photo was from a Flickr set called Signs by Tim the Sailor.  Like our Flickr friend OneEighteen, Tim the Sailor is a professional mariner who’s also a good photographer. From the About page of his great blog Tim’s Times:

I’m originally from Ireland but now live in Sweden.

The blog is mostly about ships or related to the shipping industry, but not limited to that, it’s a blog not a professional publication.

I am a qualified Master Mariner and have been working in shipping since 1990. Opinions expressed have experience in their substance, of course they are my opinions and I take responsibility for them.

Check out his Flickr photostream. He is also pretty active in the social media space; in addition to Tim’s Times, he’s got a great photoblog, Photo Journey, and you can keep up with him on Twitter. Tim experiments with his photography and does a great job of capturing the life of a sailor. Hope you enjoy his work.