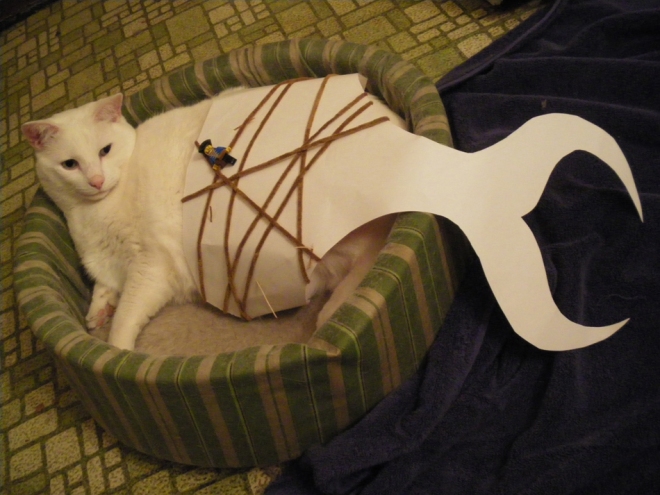 The New Yorker is marking Halloween with a “Critterati” photo contest—pix of pets such as Clarence here dressed as literary figures. The contest closed for entries yesterday, but you can still peruse all the contestants at the New Yorker site. (Don’t miss another fave, Puppy Longstocking.) Winners selected by a panel of judges will be announced October 28. Team Clarence!

You don’t have to be a pet owner to mark the holiday as it should be marked—that is, with sly references to Moby-Dick. At the Roger Williams Park Zoo in Providence, Rhode Island, a set of Moby-Dick themed pumpkins depicting Herman Melville and scenes from the book somehow made it into this year’s Jack-o’-Lantern Spectacular on the theme of “Fables of the Great Writers.” Other stories featured include Hansel and Gretel, Snow White, and Rumplestiltskin. Don’t they know Moby Dick was (sorta) real? The literary pumpkins are on display at the zoo through November 1.

Each week, The New Yorker magazine provides a cartoon in need of a caption. Readers submit captions and the New Yorker chooses three finalists, and readers vote for their favorite.

Finalists for this week’s cartoon will appear online Monday, September 28th, and in the October 5th issue of The New Yorker. Any resident of the U.S. or Canada (except Quebec) age eighteen or older can enter.