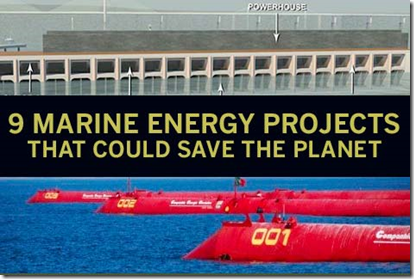 Fast Company has an interesting slide show with a grand title: 9 Marine Energy Projects That Could Save The Planet. From Fast Company:

Marine energy has taken a back seat to its more well-developed and well-funded rival, wind. That’s about to change. Water has several advantages over wind power: marine current turbines (essentially underwater windmills) tend to be smaller and less costly to produce than their terra firma brethren, and wave energy and tidal flows can be predicted with much greater accuracy than wind speeds. The power contained in accessible coastal currents is estimated at about 4,000 TW, or about a quarter of the electricity demand of the entire world. Some recent developments have been especially encouraging. The first 5 projects here have been shortlisted as candidates for the Severn River between England and Wales.