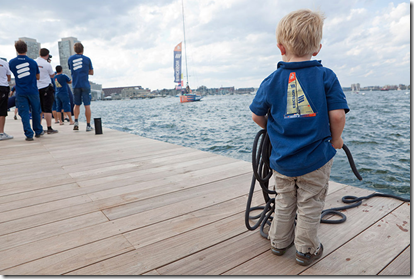 Today’s Boston Globe’s Big Picture blog has an amazing series of photos from the Volvo Ocean Race which recently made a port stop in Beantown. The above photo by Oskar Kihlborg show navigator Jules Salters’ (UK) son Fred ready to tie daddy’s boat to the dock as he arrives in Boston harbor. Check out all of the great photos. From  the Boston Globe:

The 2008-2009 Volvo Ocean Race has arrived in Boston Harbor. Boston is the 6th port city for the eight teams which will race around the globe for nine months over 37,000 nautical miles split into 10 legs. The ships they sail are Volvo Open 70 class racing yachts, 21.5 meters (70.5 feet) long, manned by a crew of 11. While the ships are in port, they hold in-port races as well as hosting events and entertainment for local residents. Tomorrow (Saturday, May 9th), the fleet will hold its in-port race in Boston Harbor, and later, on May 16th, they will depart for leg 7 of the race, to Galway, Ireland, concluding the race in St. Petersburg, Russia in late June. Oskar Kihlborg, team photographer for Ericsson Racing with nearly 15 years experience as a sailing photographer has been kind enough to share the following photos with us.