For centuries nautical words have made their way ashore integrating themselves into our everyday language. You can hardly read a daily newspaper today without coming across a reference to a business experiencing “rough seas” or “smooth sailing,” a CEO being “thrown overboard” by directors or an unprofitable product line being “jettisoned.” You may have even felt “under the weather” or been “left high and dry?”

The December 23, 2007 NY Times Buzz Words column kept this tradition alive in an article entitled All We Are Saying. Grant Barrett wrote:

A large part of the delight derives from the re-orientation that new words make possible. They are fantastical transportation — portkeys and improbability starships — into other cultures, workplaces, minds.

According to Barrett, the 2007 nautical addition to our contemporary lexicon was:

A very short shower in which you turn off the water while lathering up. This old term is also known as a G.I. bath, but it’s new to many in the drought-stricken Southeast. Its antonym is the Hollywood shower, a long, wasteful one.

In the 2006 edition of Buzz Words, “stay the course” presented a nautical take on the Bush administration’s communications regarding US strategy with respect to Iraq.

Here’s an interesting article on this topic titled Your Talk is Saltier Than You Think.

Do you have any favorite nautical terms that have taken “shore leave?”

Another maritime photo makes the Year in Pictures. Here’s a shot of the maritime icon, the Cutty Sark in Greenwich, England up in flames.

A fire ravaged Cutty Sark, the historic tea clipper in Greenwich, as it was undergoing a £25m conservation.

I previously wrote about this here.

MSNBC has an awesome 2007 Year in Pictures photo slideshow. Please be advised that some of the images are very graphic.

The above image was taken by Robert Cohen for the St. Louis Post-Dispatch.

Pushing barges on the Mississippi – A tug boat pushes a load of barges along the Mississippi River toward Winfield, MO, on Feb. 8. Barge traffic was slowed by winter weather and the U.S. Army Corps of Engineers decision to limit barge loads so they could slip through the ice coated locks.

It’s that time of year where lists of made. The above picture made Reuter’s Pictures of the Year 2007.

The M/S Explorer cruise ship sinks hours after hitting an iceberg off the coast of the Antarctic, in this photo released by the Chilean Army November 23, 2007.  (REUTERS/Chilean Navy)

Episode 4 of Messing About In Ships, your new maritime podcast, is now ready.

This week’s highlights including

Please subscribe via iTunes or download the MP3. (Windows users can right click here and save the file on your computer. You can then open it in Windows Media Player, iTunes and other media players.)

For the show notes and links and to offer feedback, please visit the Messing About In Ships blog.

Here’s an older video clip that I found on YouTube this morning about the Los Angeles Maritime Institute, sail training, education and tall ships in general that is very effective at explaining what this powerful experience is all about. In this age of digital learning, tall ships offer youth real life adventure combined with practical education and social experiences in a challenging yet fun environment and today kids would benefit from more of this.

Hope everybody had a great Holiday! We did here.

Back in 1999, my Dad and I went to Egypt for an adventure of a lifetime. For Christmas this year I finally got around to editing the nearly 10 hours of video that I shot. For the first week we traveled by night on a cruise ship, arriving at the next amazing destination by morning. Here’s some footage that I shot from the ship. I typically use Window’s Movie Maker but decided to test Adobe Premiere Elements trial which explains the ugly watermark. Fortunately, it’s not too distracting. Enjoy.

Christmas is only a few days away and here’s a mysteriously beautiful photo of the Lynchburg ferry in light fog entitled Christmas Is Coming by Flickr friend and Houston ship pilot Louis Vest . What a great way to start the weekend and begin celebrating the holidays!

Lou’s been generous to let us use his images for the Messing About In Ships podcast. We will be changing the blog header and album art of the podcast each month to coincide with the artwork that Lou has generously provided for the 2008 Houston Ship pilot’s calendar, the proceeds of which will benefit their foundation, Anchor Watch.

Get in the holiday spirit by buying a calendar and supporting a worthwhile cause!

Lou’s amazing photography can be viewed on Flickr.com. 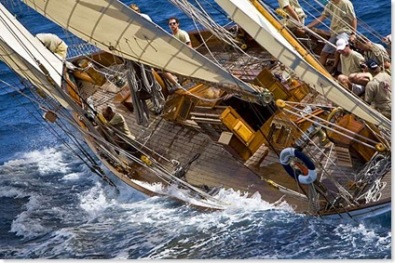 Sports Illustrated has their great annual Year in Pictures up. The above shot was taken during Rolex Veteran Boat Rally in Porto Cervo, Sardina, Italy on September 9th and it’s the only sailing photo of of 43 published on their the website. Surprisingly, there’s nothing from the 2007 America’s Cup which took place this year in Valencia, Spain.

The above photo was taken by Carlo Borlenghi who has an amazing website of his work. Check it out!

Episode 3 of Messing About In Ships, your new maritime podcast, is now ready.

This week’s highlights include:

Please subscribe via iTunes or download the MP3. (Windows users can right click here and save the file on your computer. You can then open it in Windows Media Player, iTunes and other media players.)

For the show notes and links and to offer feedback, please visit the Messing About In Ships blog.