Today was one of those days that reconfirms the transformative power the sail training experience can have on young people’s lives.

I arrived at the Providence a little before the bus and after the USCG completed the final portion of their inspection. As I walked down the ramp of the floating dock I was met by a gentleman who had a few questions about the boat. It turned out that his daughter was part of our program and he was in the neighborhood and wanted to take a look. It didn’t seem to take much selling to get him interested in the parent sail scheduled for Friday afternoon.

The bus arrived missing one of our star trainees from Day 1 but we picked up a new one new so our count remained even at 13. Not too much later, our missing young man arrived with his dad who seemed a little annoyed that his son missed the bus.

The beginning of day 2 and we already have 2 fathers down to the boat with interest about what their children were doing. This is a great sign.

We started the day with muster on the main deck where I took a few minutes to talk about teamwork and leadership. We then separated the watches and instructed them to select a watch leader amongst themselves. The idea here was to distribute responsibility to the youth early in the program and get them actively engaged in the management of the vessel. A good question was raised about the responsibilities of the watch leaders and I advised that their job as to make their watch work more effectively and be my primary point of contact in each watch. The logical candidates were elected watch leaders; however, there was also a interesting development.

Yesterday’s losing watch selected a bright and personable young man as Day 2 watch leader; however, during the process a young woman expressed interest in the position as well. The watch decided the young man would be leader on Day 2 and the young woman would be leader Day 3. What I found most interesting was that on Day 1, this young woman did not appear to be actively engaged and I wouldn’t have been all that surprised if she hadn’t returned on Day 2. She just didn’t appear to be having fun or enjoying herself on Day 1. Lesson number 1 – Don’t judge a book by its cover and it’s dangerous and unfair to set low expectations for participants in programs like this. Throughout the entire day, this young woman was extremely engaged and exercised the most informal leadership aboard the vessel all day.

Day 1 winning watch moved aft where they began planning the Day 2’s voyage with Captain JC Parker while the other watch scrubbed the main deck. Funny thing is that what initially might have appeared as less preferable duty, was undertaken with enthusiasm and focus. This was really the beginning of this watch coming together as a team and it was exciting to witness.

We next headed out to sail; the wind was pretty light and as with can be the case off of Fort Adams the current was strong so that any speed we made through the water was virtually wiped out. That was actually okay because it allowed us several teaching opportunities throughout the sail.

By far the biggest hit of the day occurred when the line locker was opened and every trainee began practicing tying knots, making rope bracelets and other things. It was great to see the interaction between the Providence crew and trainees. 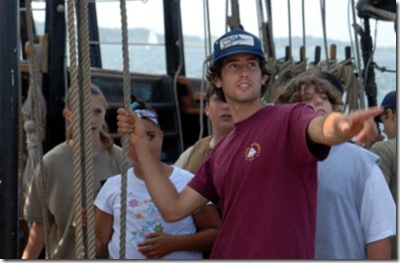 At the morning muster, I talked a little about the maritime tradition of arts at sea. I mentioned Moby Dick and Herman Melville which the kids recognized but doubtfully read. We distributed notebooks/journals for the trainees to use to take notes, write stories and draw pictures. It was great to see that these notebooks were very actively throughout the day.

Day 2 ended with a knot tying contest – the one handed bowline was the knot. Not surprising our young woman Day 3 elect watch leader was pretty determined to win this contest and did. This was followed by a tour of the crew quarters and the berths in which trainees will sleep for the overnight expedition. During the final debrief of the day, it was great to hear the overwhelmingly positive comments from both watches.

These kids have come so far that Day 1 seems like a long time ago. The power of the sail training experience clearly manifested itself today.

Leave a Reply to Peter A. Mello Cancel reply