Maritime historian, OpSail creator and South Street Seaport founder Frank O. Braynard has passed away at the age of 91.

While the modern day concept of tall ships events was first launched in Europe in 1956, Mr. Braynard brought the spectacle to US shores linking an event called Operation Sail to the World’s Fair in 1964. Celebrating our country’s rich maritime heritage as well as the international camaraderie and goodwill engendered by the young participating trainees, OpSail attracted the attention and endorsement of President John F. Kennedy, a sailing enthusiast himself. 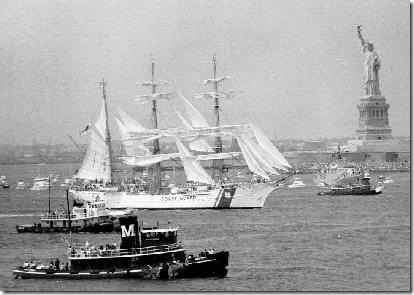 The 1964 event was the inspiration for a much larger event in 1976 which would become the centerpiece of the United States Bicentennial Celebrations. A period during which the Cold War was still in full force and New York City was experiencing significant fiscal challenges and racial strife, Braynard’s efforts were hailed in the media:

“Almost single-handedly, he saved the Bicentennial from banal commercialism and gave America the most meaningful observance of its independence by far.” Newsday 1976

“New York, the nation and the world are richer because of Braynard’s imagination and dedication.” Daily News 1976

I was a trainee onboard the SSV Tabor Boy at this time. Although we did not sail down to the festivities in New York, we raced from Bermuda to Newport, RI and participated in the Boston OpSail event. It was one of the most memorable experiences of my young life and I will be forever grateful to people like Frank Braynard, Howard Slotnick, Barclay Warburton III and Admiral Thomas Weschler for making it happen.

Events like Opsail in 1976, and more recently the American Sail Training Association’s TALL SHIPS CHALLENGE Series, are attended by millions of spectators. They celebrate North America’s rich maritime heritage. At a time where cultural and heritage tourism has been become so important, they help cities like Newport, RI, Halifax, NS, Victoria, BC and Bay City, MI build a distinctive “brand” that is attractive to visitors from across the globe. Finally, they can generate significant economic impact. For example, from it’s launch in 2001 through 2006, ASTA’s TALL SHIPS CHALLENGE Series visited 36 North American cities generating approximately $400 million of economic impact for host communities in the process.

But to me the most important part of Mr. Braynard’s legacy is how these events bring together young people from different nations and cultures and help promote international understanding and goodwill in the process. I have experienced this first hand, as a trainee in 1976 and then as ASTA Executive Director and event organizer from 2001 through 2006. Today’s NY Times (December 14, 2007) captures it well:

For Mr. Braynard, Op Sail 1976 represented a small contribution to easing tensions between the United States and the Soviet Union. As he prepared for it, he said, he was “terribly worried about the arms race.”

“I think Operation Sail is one little drop in the bucket on the other side,” he said. “We are all seamen on the ship Earth.”

7 thoughts on ““We are all seamen on the ship Earth””