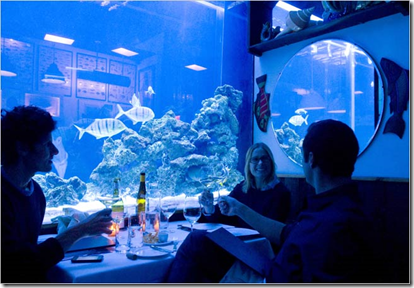 A new restaurant has sailed in and taken the Big Apple by storm. It’s called The John Dory and Frank Bruni reviews it in the NY Times today. (Ocean Deep in Ambience)

TOO many new restaurants are just minor rewrites of a half-dozen restaurants before them, profit-minded plagiarisms with a side of bacon-studded brussels sprouts.

Not the John Dory. In what is clearly a labor of not just love but also vivid (sometimes too vivid) imagination and real guts, the chef April Bloomfield and the restaurateur Ken Friedman have fashioned a place that doesn’t look like any other and that doesn’t taste like any other, either.

ATMOSPHERE A visually frantic, kaleidoscopic riff on a chowder house with an open kitchen and two dining areas divided by an enormous fish tank. (Entire review)

The Times awarded it 2 out of 4 stars which translates to “Very Good.” It must be because you need to call four weeks ahead to reserve a table.

The John Dory has an interesting blog which you might want to navigate to before embarking on your deep sea food adventure.

Finally, in case you don’t actually know what a John Dory is (and I didn’t):