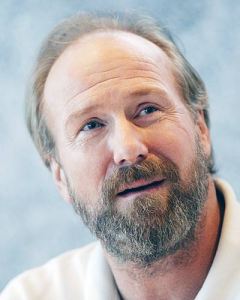 I’ve envisioned William Hurt as Ahab ever since I saw him in Kiss of the Spider Woman. And now that vision is realized: German production company TMG just announced that its upcoming Moby-Dick miniseries stars Hurt as Ahab and Ethan Hawke as Starbuck. Filming begins shortly in Nova Scotia—where one boatbuilder got the contract for six replica whaleboats—and Malta, where a tall ship has been cast to play the Pequod.

So far, that production sounds fairly faithful to the text; if you’re looking for “Moby Dick as Frankenstein” and whalers who can fly, you’ll have to wait for the planned Moby-Dick action film by Wanted director Timur Bekmambetov.

Then again, if you’re really patient and you really want a break from that tired old storyline, check out this hilarious script for the trailer for Moby-Dick: Ahab’s Revenge, by a blogger called tpalumbi. The film—which, strangely, has not yet been optioned—is envisioned to star Shia LaBeouf as Ishmael, Kate Hudson as his love interest, The Rock as Queequeg, and Jason Statham (known for starring in Guy Ritchie films) as as an Ahab with four steam-powered legs. Well, you know, if you can’t get William Hurt …