There was an error retrieving images from Instagram. An attempt will be remade in a few minutes.

Sick and tired of all of the bad news in the papers and on the web? Longing for simpler times? Jamie Budge’s The Living Curl might be the antidote.

This Thursday (January 14, 2010), the Santa Barbara Maritime Museum offers The Living Curl in an old fashioned, 60s presentation: narrated live and in person by Jamie Budge. Five bucks gets you in, $10 more gets you tacos and a beer. Sounds awesome.

That’s according to a short sea story told by Bowsprite, one of the most amazing ports of call on the Internet. Please do yourself a favor and check out this maritime treasure.

Jesse Pesta wrote a great piece on the SS United States for the front page of today’s Wall Street Journal. Fans of World’s Fastest Ocean Liner Put Out a Distress Call Sept. 29, 2009) (free content) There’s a great nostalgic slideshow which includes the below photo of the author onboard at 2 years old.

The quote in the title of this post comes from the naval architect, William Francis Gibbs, a very interesting character who prided himself in beating his British counterparts in designing the fastest ship in the world. In fact, this was more a matter of national than personal pride during the post World War II technology boom. That’s him in the below photo watching his ship leave NY harbor. 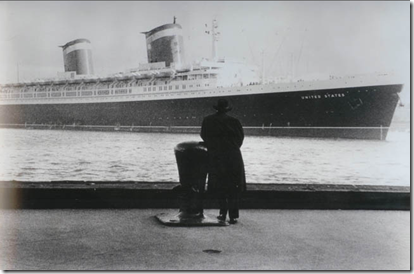 If you’ve read Mr. Pesta’s article in the Wall Street Journal and you’re still not convinced that this grand old ship should be saved to preserve an important piece of America’s maritime heritage history, please watch this trailer for the PBS documentary by Big Ship Films, Lady in Waiting.

Here’s another promo for the documentary that has some different footage and is worth watching.

Wonder what it was like to sail the Atlantic on the SS United States? Here’s a home movie from the 1950’s (via ShipGeek):

Unfortunately, things look a little different now. Here’s a video from Phillip Buehler great Modern Ruins website where he rollerblades the Promenade Deck to music by the ship’s orchestra that he found on eBay. Make sure you check out all of the amazing then and now photos in the SS United States section of Modern Ruins.

This is a project of monstrous proportions.  We can only hope that this old grand dame does not end up on a beach to broken up somewhere far away. She deserves better than that.  Please raise awareness, spread the word and share this post with people you know who might care. Thanks.

Coalition to Save the SS United States

On May 20th, the Smithsonian’s National Museum of American History opened a new permanent exhibition, On the Water. While I haven’t had the chance to visit the museum, I’ve spent some time on the companion website and all I can say is that it really should be called MaritimeHistoripedia!

From the museum’s press release:

“The maritime influence on American history is one of the most compelling chapters in the national story,” said Museum Director Brent D. Glass. “‘On the Water’ will transport visitors to places they have never been, allowing them to experience life at sea through the experiences of real people and objects from one of the Smithsonian’s oldest collections.”

Marine transportation and waterborne commerce underlie American history like a strong and steady ocean current. Maritime trade established major cities, created connections between people and places and opened the continent. Visitors to this new permanent exhibition will explore life and work on the nation’s waterways, discovering the stories of whaling crews, fishermen, shipbuilders, merchant mariners, passengers, and many others. From 18th-century sailing ships, 19th-century steamboats and fishing craft to today’s mega containerships, the exhibition will reveal America’s maritime connections through objects, documents, audiovisual programs, and interactives. Visitors will discover the continuous and significant role maritime activity has played in American lives.

If you enjoy reading the Sea-Fever blog, you’re going to love exploring On the Water. But make sure you’re wearing you Internet PFD, because you could drown in the depth of information anchored there. Things are organized by period:

As well as by theme:

You can also search the museum’s vast maritime collection filtered by keywords and eras that reflect National Standards for U.S. History, Grades 5-12. Video and audio clips are extensively and effectively used throughout the website and there’s some great age appropriate learning resources available for educators and families too.

One of my favorite things about On the Water is the way they’ve create a mash-up of several popular social media websites to engage and enlist visitors in adding to America’s rich maritime story.  Visitors are invited to upload photos to Flickr.com and post them to the OTW snapshots group which is linked to the below Google Map.

On the Water is a fantastic website for anyone interested in America’s rich maritime heritage. Take the plunge, the water’s great. 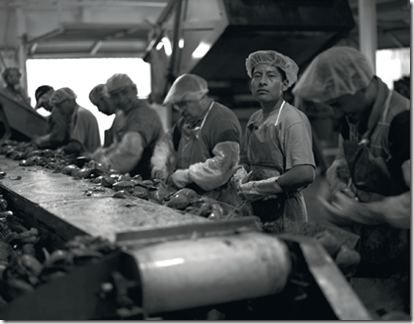 The name in the title might look familiar and that’s because the artist is my cousin. Today the New Bedford Whaling Museum is opening a show of Phil’s amazing collection of photographic portraits of New Bedford commercial waterfront workers. From the museum’s website:

Working Waterfront, Photographic Portraits focuses on local shoreside workers and their jobs: from fish cutter to purveyor, from welder to auctioneer, from lumper to inspector, as well as fishermen. Each person, each job, is vital to the daily operation of supplying seafood to market. All photographs were taken by Phillip Mello, mostly using a Mamiya RZ 67 camera with Kodak BW400cn Professional film. They are part of a project he began early in 2008 and which continues today: to photograph the local fishing industry through the people who work in it. Mr. Mello knows these people and this place well, having worked on the waterfront for over thirty-four years, currently as plant manager at Bergie’s Seafood. His photographs benefit from this closeness, and we are fortunate to have had these doors opened.

There’s an opening reception this evening after the Whaling Museum’s Annual Meeting and before/during their very popular After Hours Friday night social event. But in case you can’t make the event or have trouble getting to the gallery anytime soon, you can experience Phil’s work via the Whaling Museum’s Flickr page.

Phil is also the president of the New Bedford Port Society which owns and operate the Seamen’s Bethel, which first came to fame as the Whalemen’s Chapel in Herman Melville’s classic American novel Moby-Dick, as well as the historic Mariner’s Home.

Reproductions of photographs in the exhibit are available via the Whaling Museum’s photography department by contacting photoresearch@whalingmuseum.org. Proceeds from their sale will be split evenly between the Whaling Museum and the New Bedford Port Society.

It’s an amazing body of work that celebrates the spirit of the people who work anonymously on New Bedford’s commercial waterfront everyday. Thanks to Michael Lapides, the New Bedford Whaling Museum’s Director of Digital Initiatives / Curator of Photography for giving the community the opportunity to get this inside look and for creating a historical document that captures an important part of New Bedford today. And thanks Phil, the Mello family is proud!

Duchesse Anne in Dunkirk, France – Formerly a German training-ship called Grossherzogin Elisabeth, built in 1901. She was saved from scrap by the City of Dunkirk in 1981 and is currently an exhibit at Musee Portuaire Dunkerque

. With an overall length of 90 m, she is the biggest tall ship preserved in France. (via GoogleEarthHacks) 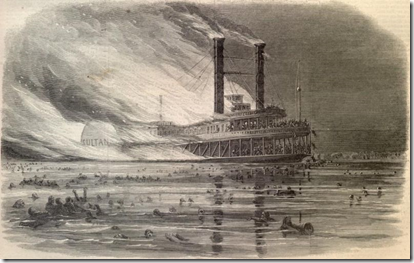 At 2:00 AM on April 27, 1865, a catastrophic boiler explosion took place on the grossly overcrowded wooden paddlewheeler S.S. Sultana. The ship was less than 10 miles from Memphis, TN on the Mississippi River when the explosion occurred. The overcrowding of the vessel was due to the large number Union soldiers from Ohio and Indiana returning home from the Civil War many of whom were recently released from Confederate prisons. The precise number of casualties is unknown but estimates are that 1,300 to 1,900 lives were lost.

This is the worst maritime disaster in US history yet few American’s are aware of it. In it’s day and ever since, it was overshadowed by the assassination of President Abraham Lincoln which had taken place two weeks earlier on April 14, 1865.

Last week I received a copy of Alan Huffman’s Sultana: Surviving the Civil War, Prison and the Worst Maritime Disaster in American History (2009). I had the chance to start reading it yesterday and am currently about a quarter of the way through it. So far it’s a fascinating read. If like me, you are interested in American and maritime history as well as leadership, this book’s also for you!

Here’s a few Sultana websites to check out on the 144th anniversary of the worst maritime disaster in American history: